Home VR Games ‘Blasters of the Universe’ Will Keep You On The Edge Of Your Seat
VR Games
VR News
August 31, 2017 SJ Kim 0 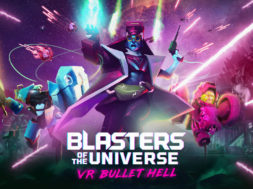 Strap on ladies and gentlemen as you’re set to embark on an epic journey in Blaster of the Universe. Developed by Primetime Emmy Award-winning studio, Secret Location, Blasters of the Universe challenges you to survive the wrath of the virtual god Grand Master Alwyn – an insecure man-child who was once the undisputed king of the local arcade.

Shunned by the other kids and ignored by everyone else, Alwyn’s true friends were his stack of quarters and those ever-loyal arcade cabinets. Realizing his absolute dominance in the arcade world would never be recognized by the people around him, he uploaded his consciousness into VR – transforming himself into Grand Master Alwyn, Virtual Space Lord.

In Blaster of the Universe, you must dodge intricate bullet patterns in full room-scale VR as you blast your way through an unrelenting onslaught of enemies with a customized weapon and shield loadout – picking and choosing from tons of parts and modifiers to make each weapon your own.

The VR game features multiple levels with full campaigns that allows you to unearth the secrets about the universe. You’ll also be facing some menacing opponents and bosses in a neon-bathed world straight out of ‘90s VHS cover art.

Blaster of the Universe also features an Endless mode where you can play on continuously in this imaginative world.

Blaster of the Universe is available today for %15 off on Oculus and Steam for $12.74. Sale ends on September 7th where it’ll go back up to the original price of $14.99. Make sure to pick up the game today and give this wonderful experience a go. If you’re at PAX West, make sure to stop by their booth and try the new game first hand.