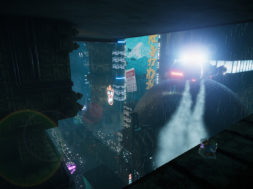 Now, there’s a new VR experience available called Blade Runner 9732 that takes you on a virtual tour inside Deckard’s apartment. In the app you’ll be able to have a drink on the balcony where you can view the streets from the 97th floor. You’ll also be able to play the piano and even start the Esper Machine.

This is a fan-made VR experience and not an official release. But it does allow you to virtual experience what it would be like to live in Deckard’s apartment in the dystopian future. This experience is based on the original movie and not the one that was recently released starring Ryan Gosling.

The apartment itself is dimly lit similar to the original movie. The cool thing about this experience though is that you get to hear Deckard’s (Harrison Ford’s) voice in the experience when you interact with certain items such as the Esper Machine. You can hear voice clips of him saying “stop” or “pull out track record.”