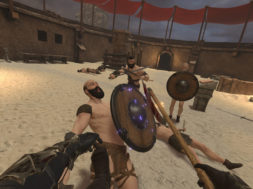 Blade And Sorcery is one of the more recent titles to release on the VR platform. Produced by WarpFrog Studios, the game takes you inside a medieval fantasy sandbox with full physics driven melee, ranged and magic combat. You get to become a powerful warrior, ranger or sorcerer and devastate your enemies.

In the game itself you get full control of movement and get to engage in combat in your unique style and talent. In the GIF above you can see how dynamic you can be with attacks beyond traditional X, A, B, Y buttons found on consoles games. Rather, you get to wield a motion tracked controller and swing away with more fluid motion to practice your techniques.

In addition, you can point your weapon in which ever way from a traditional stance to more of an assassin stance where the blade is facing the opposite direction in your hands. You can even flail around a spear to deflect oncoming attacks and parry.

The above video by MERPTV will also show you how brutal you can be with your attacks. In the video, the YouTuber goes for many final blows by stabbing the virtual opponents in the head with spears and swords. Blade and Sorcery also allows you to interact with digital objects found in the sandbox. For instance, you can place a bucket over someone’s head.

This game is not for the faint of heart so make sure to only play this game if you are into gore or combat type of games. Blade and Sorcery is available today on Steam for $19.99. It is compatible with both the Oculus Rift and HTC Vive.