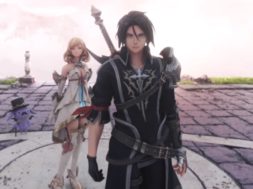 By now, you should know that Japan has probably some of the best and most exclusive VR experiences available to date. For example, if you visit the VR arcade in Shinjuku, Tokyo, you’ll get to experience first hand Mario Kart GP VR for HTC Vive and Dragon Ball VR ‘Master the Kamehameha.’ Now, there’s another incredible VR game exclusive to Japan called “Black Knight And White Demon VR.”

Releasing on October 20th at VR Park Tokyo, Black Knight And White Demon VR allows you to play as the Black Knight character who’s been summoned to infiltrate the Devil’s castle. You’ll embark on an epic journey to defeat white demon king Zero with fellow Theo, Aria. The creators describe the game as a “story full of realism with a high quality going from your point of view.”

In the trailer you can see how striking the graphics look. It’s actually one of the best looking graphics we’ve seen thus far on a PC based VR platform. But as mentioned earlier, this game can only be played at VR Park Tokyo located in Japan. Will these games ever be available in the western countries? That remains to be seen. But hopefully one of the VR giants can port it over to us in the near future.