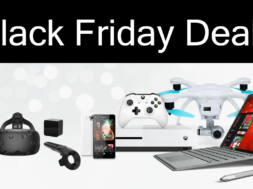 Tis the season for us to rejoice upon the epic Black Friday deals. For the first time ever, stores and companies are offering some nice deals to save money on VR headsets. Microsoft will be one of the few selling the Oculus Rift and the HTC Vive With a Gift Code through their online store. While that seems a little odd, we should embrace it as a gift and make the best of our savings.

There are many out there that still find the headsets expensive and unaffordable but with this discount it might help justify those costs. And not only is Microsoft offering deals on VR headsets but they are also offering deals on PCs and laptops that are VR capable.

Tech companies are still looking for ways to pave a path for growth in the VR sector. Offering discounts and making it affordable for the general consumer market is one way to do so.

The Black Friday deals for the Vive and Rift will start on November 24th at 12 AM EST at the Microsoft Store. They’ll be offering $100 Gift Codes with heavy discounts on PCs and laptops. Best Buy will be offering $100 store credit with the purchase of the Oculus Rift headsets. We hope you take advantage of the offers and have a chance to experience what VR is all about if you haven’t had a chance to do so.

Also, HTC Vive is offering deep discounts on VR games and experiences through their Viveport App Store with many titles being 50% off the original price. Below are the titles that you’ll see with discounts: