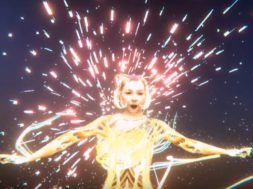 ‘Notget VR’ takes viewers into a fantastically bizarre underwater world, where a virtual Björk performs. Her body, a hollow exoskeleton shell resembling a futuristic dark-angel insect, fully equipped with wings, glows and ignites in a fiery passion as she sings. A tentacle-ed creature swirls around her, transforming and glowing as well. The song is from her 2015 album, Vulnicura, which is dedicated to the dissolution of her relationship with famous American multimedia artist Matthew Barney. The music video is as aesthetically engaging as it is heart wrenching.

The pop sensation is delving even deeper into VR this summer, with her LA-based Björk Digital exhibition. Starting May 19 through June 4, the exhibition will showcase her previous VR videos from  Vulnicura, in which she has re-released these tracks. ‘Notget’s’ predecessor videos include ‘Family,’ ‘Stonemilker,’ ‘Mouth Mantra,’ and ‘Black Lake.’ Visitors will also be able to experience ‘Black Lake’s’ immersive sound space installation as well. Björk Digital will also live stream her VR Tokyo performance of ‘Quicksand’ on a unique 3D printed HMD designed by Neri Oxman, American–Israeli architect, designer, and professor at the MIT Media Lab. Aside from the exhibit, Björk is set to have a live performance at LA Philharmonic’s Reykjavík Festival on May 30th with conductor Bjarni Frímann Bjarnason and a full orchestra.

The 51-year-old star is cementing her status as pop pioneer on the forefront of music entertainment’s future with the inclusion of VR in her videos and live performances, a trend that we’re sure to see other artists adopt with increasing popularity in the near future.