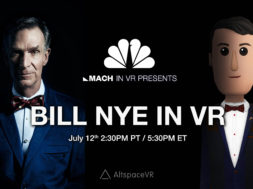 AltspaceVR has been home to some notable icons over recent time including the famous NBC weatherman Al Roker and Comedy Living Room’s comedic duo, Matt Lottman and Frank Chad Muniz. Even Reggie Watts made an appearance. AltspaceVR has been hosting many interactive events within the VR space to help drive the medium to the public. On Wednesday July 12 at 5:30 p.m, they’ll be bringing on another famous figure, Bill Nye (the science guy) for NBC’s new segment called MACH in VR.

Billy Nye will be joining a one-hour event where he’ll be talking about his his latest book, “Everything All at Once.” In the book he states that he’ll aim to “remake our transportation network, solve climate change, drastically reduce poverty, and vastly improve human health.” Nye will also go over his “eight principles of everything” where he believes society needs to cultivate the idea of the “nerd mindset.”

The interview will be conducted by MACH’s editorial director, David Freeman. Afterwards, they’ll be conducting a question-and-answer session. If you’ve been curious in asking Bill Nye a question, this will be the perfect setting to do so.

MACH in VR is free of charge and open to the public. However, you must RSVP to the event. And while you don’t necessarily require a VR headset for AltspaceVR, it’s highly encouraged to use one to join Bill in the virtual space.

For those of you that can’t join MACH in VR, you can simply stream it live below on Wednesday July 12 at 5:30 p.m. Make sure to tune-in and have your questions handy as you can be one of the lucky individuals to ask Billy Nye The Science Guy a question! MACH in VR will be hosting many more events with notable figures in the near future in AltspaceVR.