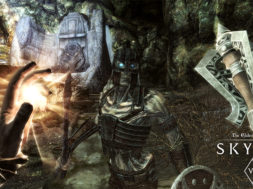 Bethesda has just announced that they’ll be bringing one of their biggest franchise titles, Skyrim, to SteamVR. Skyrim VR was first launched on PlayStation VR last November as a timed exclusive but now will be getting a port on to the PC VR platform.

Skyrim VR will be available for the Oculus Rift, HTC Vive, and Windows mixed reality (Samsung Odyssey, Dell Visor, etc.) users starting on April 3rd for $59.99 through Steam. The game will include the full content from the original Skyrim game that was released back in 2011.

When Skyrim was first released on PlayStation VR, it outsold the Nintendo Switch version of the game in the UK This was quite a surprise considering that there are more Switch consoles available worldwide compared to the PlayStation VR headset.

Once Skyrim releases on Steam, we will see if mods become available as that was one of the biggest draws to the game.