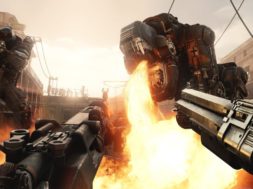 Pete Hines took to the stage to make the announcement and stated that the game will allow you to play as a hacker who can take over Nazi robots and turn their own machines against them.

Take on the role of a resistance hacker in the new VR game, #Wolfenstein Cyberpilot, playable on the #E3 show floor! #BE3 pic.twitter.com/AgXbkLlAKI

Both the PREY and Wolfenstein VR games will be playable at E3 this week. Wolfenstein Cyberpilot is set to release sometime in 2019. Bethesda did not state which headsets the game will come to but most likely we will see a release on both Oculus Rift and HTC Vive.