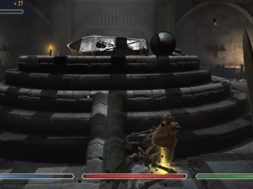 Bethesda announced a new game called Elder Scrolls: Blades. This is a new title in the franchise that will allow mobile and VR users to come together to play the same game in cross-platform functionality.

We've brought the beauty of an Elder Scrolls game to mobile.

The Elder Scrolls: Blades provides a massive first-person RPG experience you can play on your phone during those "important meetings". 😉 #BE3 pic.twitter.com/sZzShIw3DV

Users will be able to venture down pre-generated and random dungeons. You will also be able to customze your own characters and pick which hero class you want to be. This will be a multiplayer online game where you can play with smartphone users and other VR users. This includes HMDs such as the Samsung Gear VR all they way up to a Vive VR headset.

Abyss: Rogue like experience. See how far you can go in an endless dungeon.

Arena: Go 1 on 1 in a PvP mode against other players.

Town: The Hub for your story and quests. You are a member of the Blades where you were forced out of exile. Now you come back to rebuild your town and will be able to customize it.

It’s quite amazing how many VR games that Bethesda is working on. This includes Wolfenstein: Cyberpilot, PREY: Mooncrash, and now Elder Scrolls: Blades.