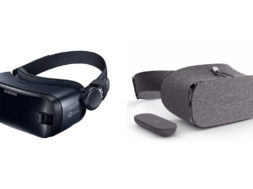 There are a lot of ways that people can enjoy VR today. From the mobile platform, to console, to even PC, people have access to a variety of quality VR experiences. Today we’ll be listing the best VR apps for Android smartphones.

There are many options and routes you can take to access VR on the Android OS. Google has their own VR platform called the Daydream while Samsung Gear VR is accessed through the Oculus Store and their own internal platform called Samsung VR. We’ll be mixing both the platforms in this list.

Krypt Crawler by Headup Games is a Dungeon Crawler VR experience for Samsung Gear VR. Users will descend into the depths of unknown caves to explore the sinister tombs and crypts. You’ll be armed with nothing but a map at the beginning of the trials.

Players will have to explore the world to find weapons and artifacts to fend yourself from hungry monsters and the undead. You’ll be coming into contact with abnormal sized creatures such scorpions, spiders, and many other creatures that are surely to give you a scare.

Krypt Crawler is a turn based VR game that brings alive the old school feel in gameplay and real time combat that will test your skills.

Amaze VR is one of the fastest rising VR apps in the market today. They provide a platform where you can enjoy high quality immersive content from some of your favorite YouTubers and influencers. It currrently houses over 100 different immersive stories that’ll provide you a variety of content and fun.

The Amaze VR app is free for you to enjoy today. They continue to add video content to their platform on a regular basis and will be adding a new social feature called voice commenting where you can leave comments in the form of rhetoric over written messages.

Minecraft is one of the most famous games of our generation and it is now available on the Samsung Gear VR. In this mobile VR game you an build, explore, and battle mobs, similar to how you play the original game. With the added virtual reality component, you’ll be more immersed in the experience than ever before.

Minecraft on Gear VR supports most feature of Pocket Edition such as Creative and Surival modes, skins, multiplayer, and more. Make sure to give Minecraft Gear VR edition a go!

Augmented Empire is a story-driven tactical RPG VR game set in the distant future on an island called New Savannah. This isolated neo-noir city is divided into three tiers by the ‘Citizen Grade System.’ While the citizens deemed of high societal value live in luxury at the summit, outliers and criminals are forced to live in squalor at the island’s depths.

From the armchair of their secluded hideout, you’ll use simple look-and-click controls to instruct the team of 6 augmented misfits in a world rendered as an ‘augmented reality’ diorama before their eyes. You’ll be able to interact with the office around the characters to investigate new developments, make calls, and develop the skills of your team.

Voice actors for the game include:

Keep Talking And Nobody Explodes

Keep Talking and Nobody Explodes is a popular mobile VR game that puts one player in a trapped virtual room with a ticking time bomb. The player must defuse the bomb before it explodes in your face and virtuall kills you.

The other user in the game plays as an “expert” who must provide you with instructions in how to defuse the bomb by deciphering the information found in the bomb defusal manual. When you play the game, you’ll know that there’s a catch to it: the expert can’t see the bomb that you can see so everyone will need to talk it out pretty fast if you don’t want to be exploded into smithereens.

Keep Talking and Nobody Explodes – $9.99

Virtual Rabbids: The Big Plan is the first Rabbids game in VR. Using the Google Daydream platform you’ll share the stage with the Rabbids in an offbeat experience in which you’re the hero. You’ll be making your way through the story which gets you closer than ever with the rabbid creatures.

There’ll be multiple instances where you’re caught up in the moment such as being on the surgery bed with rabbids trying to operate on you using unconventional tools. In another level you’ll be playing the national anthem using crazy objects.

Rabbids are known for their crazy behaviors but in this VR game you’ll start to understand what their gestures mean and why they do the things they do.

VR Karts is essentially the Mario Kart of VR. You’ll be driving a mini kart through rigorous courses in order to beat your opponents. You’ll notice that the opponent drivers are all wearing various helmets to differentiate one from the other.

Similar to Mario Kart, you’ll have access to weapons to stun the enemy drivers and beat them in the race. VR Karts is optimized to play for the Daydream platform.

With YouTube VR you’ll now have a more immersive way to watch your favorite YouTube videos and personalities. You can enter the virtual world and see some of these amazing videos on a huge screen and also see it in 360 or 180 vision.

You’ll also notice spatial audio with stereoscopic sounds to enhance the overall experience while viewing these videos on the Daydream platform.

Enter the wizardry world of J.K Rowling in this amazing VR experience called Fantastic Beasts. Based on her famous novel and franchise universe you’ll be stepping into Newt Scamander’s case to explore what lies inside this magical place.

In this VR experience you’ll be meeting and interacting with beasts seen in the movie. You’ll also be completing spells to help out these fantastic creatures. Make sure to give it a whirl.

Google Arts & Culture VR will allow you to see famous artwork from around the world like never seen before. These experiences are curated by famous museums from different parts around the world whre you’ll be stepping inside virtual art galleries to see arts from Van Gogh and Rembrandt.

The mobile VR experience will also allow you to zoom in and see the fine details in brushstroke on these masterpieces. There will also be helpful audio guides from museum experts explaining what the artwork represents. This experience is available on Google Daydream.

We’ll continuously add to the best VR apps for Android list so stay tuned for more.