Behold The Mysteries That Lurk Behind This Magical AR Box 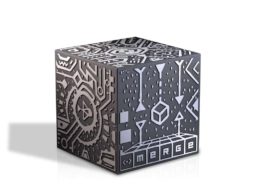 Behold The Mysteries That Lurk Behind This Magical AR Box

San Antonio based startup, Merge VR has recently launched a special type of box called the Merge Cube that seems to bring the digital world to life. Using augmented reality technology, the Merge Cube allows you to see a splendid display of animations that almost defies logic. Users will be able to see the holograms by using a mobile VR headset, smartphone, or tablet after after installing and running the Merge VR app.

“Our award-winning holographic cube gives you the power to control holograms!” said the Merge VR team. “You can play, learn, and explore in magical new ways. Just download apps using your tablet or smartphone, view the cube through your device’s camera, and watch the Merge Cube come to life as it transforms into anything you can imagine! Super power your experience by selecting the optional Virtual Reality mode, then slide your smartphone into virtual reality goggles to completely immerse yourself in holographic worlds. Its virtual reality, augmented reality, and mixed reality in one — Its Merge Reality!”

Merge VR believes that ideas will be limitless for developers and content creators. It can be used for gaming, entertainment, learning, and simply watching cool things on.

“Fundamentally, when you hold the cube in your hand, it can become any object you can imagine,” said Franklin Lyons, Merge VR CEO in an interview with RedBull. “In that sense, the opportunities are limitless. That’s why the potential is so great, because it’s a new type of tool. It will be used for entertainment and games, but it will also be used for learning, sharing and communicating. Anything is made possible when we can now hold a digital object in our hand. I think that’s profound, and I don’t want to put limits on what it will be used for.”

Lyons further added, “The Merge Cube enables an entirely new way to physically interact with digital content, and we want interested developers to have access to this tech and create new kinds of experiences. We believe in open platforms because it’s this approach that allows us to unlock the greatest potential. The time is now for developers to get in early, and create the first apps and experiences to show the world how amazing this new technology is.”

Lyons also explained that there are over 300 developers that have already signed up with their team to create experiences for the platform. “All kinds of developers and studios are interested in building for our holographic cube; single indie devs to some of the biggest entertainment studios in the world have signed up. There’s been interest from university students and tech professors, medical researchers, museums, gaming studios, and Hollywood. We’re seeing hardware hackers starting to get involved, and at a recent game jam at SXSW, hackers and musicians came together and made some pretty amazing experiences. This is starting to happen all over the place.”

On the cube, you’ll find a lot of fancy doodles and artwork that really makes the cube quite attractive. It’s currently on sale for $14.97 on Walmart but shows that it is Out of stock. The price point is quite attractive and something that’s quite feasible to afford for the general consumer market. What are your thoughts about the Merge Cube?