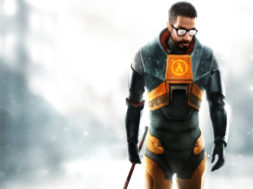 A lot of developers and creators have been working on turning some classic games into a playable experience for VR. For instance, some clever individuals created a GTA mod for VR which allows you to wield a weapon in the virtual space. You can roam the familiar streets shooting, stealing, looting, and etc. But a special group of people called the SourceVR Mod Team is currently working on turning the beloved Half-Life 2 game into a working VR mod.

In the video above, you can see how the mechanics of the game will work for this special Half-Life 2 VR mod. The video starts off at City 17 where you originally start in Half-Life 2. You’ll also see a glimpse of the gravity gun being used to combat enemies.

There isn’t a set release date yet but you must own both episodes of Half-Life 2 in order for it to work. The team will be working on releasing the full version of the game.

This is quite thrilling as we patiently await some of the promised VR content from Valve who has announced that they’ll be releasing 3 unique VR titles. If this mod comes to life, it will surely put up a fight against Bethesda’s upcoming Fallout 4 VR title.