Become The Warrior You Were Meant To Be In Ninja Legends 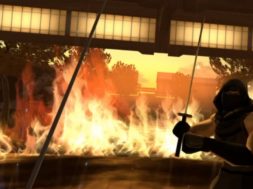 Become The Warrior You Were Meant To Be In Ninja Legends

It’s always a fun time becoming a ninja and there’s no better place to take on the role of the assassin than in VR. Luckily for us, Conflip Studios has released a new VR title called Ninja Legends where you get to transform into a silent assassin.

As the lore goes… if he attains the virtue of the long sword, one man can beat ten men. You must attain this virtue in Ninja Legends and recover the stolen shadow scrolls. Enemies will utilize cooperative group attacks to swarm and surround you.

In Ninja Legends you’ll have the ability to use weaponry such as katanas, claws, staffs, bows, chain darrts, shadow steps, and more. You’ll also be able to do some brutal enemy blows where you cut off limbs in slow motion which makes it a little more daring.

Ninja Legends is currently in early access and available on Steam for $14.99 for VR users.