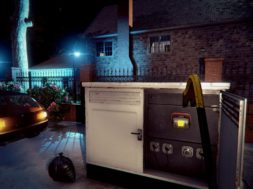 We first heard about Thief Simulator VR a few months ago and have been pretty hyped for its release. It puts you into a villain position unlike most games where you go rob people’s houses. Now that day is finally here and here is some things you should know.

Thief Simulator VR will allow you to free roam in sandbox neighborhoods. You will have to observe your target and gather information that will help you with the burglary. Your challenge will be to rob the best secured houses. Players will have access to hi-tech burglar equipment and learn new thief tricks.

You will notice how you’ll have to observe your targets. Players must notice patterns in the victim’s lifestyle such as when they are home, who lives at certain locations, etc. Then when the house it empty, you can infiltrate and rob the victim.

The goal is to do things quickly and make sure you loot as much as possible before the police arrives. There can be useless stuff in the house so identifying the right items will be a big key. There will be a limit to how much stuff you can carry in your bag.

There will also be difficulties in opening locks. Some are more difficult than others. This will be same with vehicles. You will have to know how to turn of GPS trackers, disconnect the vehicle from the internet, erase the serial numbers, and more.

Thief Simulator VR creators GameBoom VR stated that it took almost the entire last year to create this game. A lot of hard work and talent went into achieving their goals.

Thief Simulator VR is currently available for the Valve Index, HTC Vive, and Oculus Rift. The game is in early access so you will notice some kinks that need to be ironed out. GameBoom VR has stated that there will be many updates to come to try and solve some of the issues.