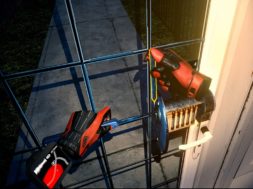 Most games in VR puts you into the shoes of a protagonist or a hero of the story but rarely do we see games where you can become someone evil. So let us introduce you to Thief Simulator VR.

In this unique VR game experience, you will become a burglar and start breaking into people’s homes to loot and steal things. You will steal in free roam sandbox neighborhoods.

Not only that, you will have to observe your target and gather information that will help you with the burglary. Players will take the challenge and rob the best secured houses.

The team has also been working on various ways to improve the experience. An example would be adding in features where you can even rob cars. But you have to be vigilante as there will be cops swarming around the scene of the crime. You can take these stolen vehicles into chop shops and make money that way as well.

There also are levels in lock-picking where you can gradually improve your skill. The more you pick, the better you become.

Thief Simulator is currently available on PC but will soon be released in a VR version. The Noble Muffins team is still in testing phases and the VR game is slated to release sometime soon. It will be interesting to see how the full product game turns out on the virtual reality platform.