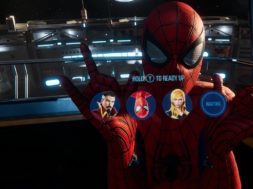 As we know, Marvel has released its first VR game called Marvel Powers United VR for the Oculus Rift. In the game itself, you can choose among many amazing superheroes throughout the comic universe. But with the hype around the new Spider-Man game, it might be worth while checking out the web slinging hero.

In this particular game, Spider-Man has many unique abilities such as Electro Shock, Quick Reflexes, Up Close And Personal, and Radioactive Blood. They all unleash unique powers that will help you take down the enemies.

In the video above, you can see a YouTuber named Cheru demonstrate what Spider-Man is like in Marvel Powers United VR. Players will be able to interact with other superheroes on your team. Your goal is to eliminate all the enemies in the map and you will have to take out all the objectives.

You will also be able face some of the key villians throughout the different levels including Venom who is an arch-nemesis to Spider-Man. The game is available today on Oculus for $39.99. You can use alternative mods like ReVive to play this game on the HTC Vive. Make sure to give it a go and become a web-slinger in VR.