Beat Saber And Other SteamVR Games Playable On Vive Focus 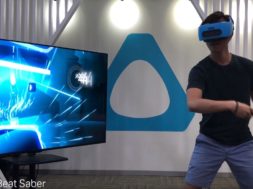 Beat Saber And Other SteamVR Games Playable On Vive Focus

HTC has announced the signing of the “5G Devices Forerunner Initiative” in partnership with China Mobile (CMCC) at this year’s Mobile World Congress Shanghai 2018 (MWCS2018). This partnership was established to accelerate the proliferation of 5G infastructure and devices in China.

With the new partnership and system update 2.0, HTC Vive Focus users will be able to stream high-end PC VR content from Viveport and SteamVR through the use of the Riftcat VRidge tool. This new feature will allow you to play hundreds of supported premium VR titles on an untethered HMD.

Users will be able to operate the PC VR applications interface by using the standard Vive Focus controller, an Xbox controller, or a third party controller paired to the host PC.

At MWCS 2018, the HTC team demonstrated how you can actually play games such as Beat Saber on the Vive Focus.

“With all the innovations we demonstrated around the tight integration of smartphones, PCs and VR/AR devices here at the MWCS, clearly availability of compelling content for VR devices is no longer an issue. We are getting yet another step closer to a future where our daily lives will be dramatically improved by immersive technologies.” said Alvin Wang Graylin, China President, HTC.

“HTC has had a long history of innovation in the telecom and immersive computing industries. We launched the world’s first 3G and 4G phones, as well as the world’s first room scale VR device and 6dof standalone VR device. There is no other company more qualified to lead the charge to drive further integration of the two spaces and innovation in coming the 5G enabled future.”