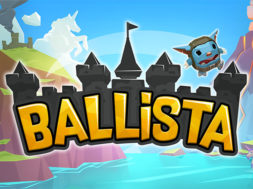 The Oculus Quest is soon to be publicly released to the world where users will get to enjoy a new standalone VR experience. And one of the new premiere VR games to launch alongside the HMD will be Ballista.

Ballista is an original Oculus Studios title from High Voltage Software who have also created titles such as Dragon Front and Damaged Core. In the game you’ll play as a hero tasked with protecting a magical kingdom by fending off evil forces with your Magic Mirror, wand made of unicorn horn, and legendary sling.

“With Quest, we’re able to better provide a full range of motion to let people move around their entire play area and impact gameplay,” says High Voltage Producer Keith Hladik. “Whether it’s defending your creatures from attack or walking around to analyze a castle, the game provides an immersive experience.”

While we don’t have any videos of the game so far, we know that the game will also launch on the Oculus Rift. The Oculus Quest will launch some time soon for $399 and we’re already starting to see it go on display in places such as Best Buy as seen by user Darkfire102 on Reddit.