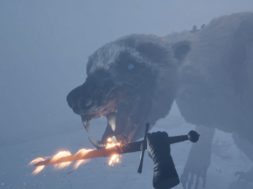 We all know that Winter is finally here in the Game of Thrones universe as we are soon about to embark on the last season of the show. And to get everyone hyped, AT&T has partnered up with HBO to deliver an immersive marketing campaign that stretches across AT&T’s footprint through retail activations, exclusive accessories, video on-demand, Magic Leap, AT&T THANKS and event sponsorship integrations – all to give customers and fans a plethora of ways to enjoy, engage and interact with HBO’s most successful drama.

“This is the biggest television event in recent history, in large part due to the show’s passionate, loyal and committed fan base,” said Valerie Vargas, SVP of advertising and creative services, AT&T.  “In celebration of that fandom, and as fans ourselves, we have created unique experiences across all of our platforms that only AT&T and HBO can offer. With this campaign we aim to celebrate the show’s superfans and its permanent place in pop culture.”

The immersive VR and mixed reality experiences were created by Framestore.

The VR experience is called “Beyond the Wall” where it allows fans to test their flaming sword-fighting skills, like the one equipped by Beric Dondarrion. You’ll have to fight against the massive wight bear and a hoard of White Walkers. Using the HTC Vive, Unreal Engine, and the latest GPU tech from NVIDIA, players are transported to a realistic scene north of The Wall and forced to defend themselves from the undead – with no dragons to help.

The Dead Must Die

“The Dead Must Die” is the mixed reality Magic Leap experience which combines the immersive experience with content based on show assets built in the Unity engine, with practical, animatronic set pieces. Players walk onto a set resembling King’s Landing where they are soon ambushed by a wight bursting from a trembling crate, which triggers a head-to-head battle with a White Walker.

“Each experience transforms the world around the participant in a unique expression of the technology used to create it,” said Framestore Creative Director David Estis. “While one envelops the player in the frozen waste north of The Wall, the other invites The Army of The Dead right into the retail environment. Both experiences are highly integrated with synchronized scenic elements that blur the line between physical and digital, an aspect that has been very important to the Framestore team from the onset.”

“There’s no better way to celebrate the finale of this epic HBO show than to give its devoted, passionate fans opportunities to immerse themselves in the Game of Thrones world leading into the final season,” said Zach Enterlin, Executive Vice President, program marketing, HBO. “Together with AT&T, we are committed to giving superfans a fun, memorable way to experience Westeros and the characters they love so much.”

Exclusive Game of Thrones Magic Leap Experience only at AT&T

Using the Magic Leap One, fans will be able to interact with Game of Thrones at the AT&T flagship stores in Boston (Boylston) on April 1, Chicago (Michigan Avenue) on April 3 and San Francisco (1 Powell) on April 6.

In each of the three stores visitors will encounter, Game of Thrones presents “The Dead Must Die,” a Magic Leap Encounter that challenges the bravest of fans to confront a White Walker and lead the fight for the living. Curious visitors will be fitted with a Magic Leap One and step into a physical representation of King’s Landing, which instantly transforms into an ominous, icy scene that begs investigation. With torch in hand, visitors become soldiers in a standoff, as a frozen portal reveals the deadly world beyond the wall. It’s scary to see a White Walker, but it’s much scarier when it sees you.

The final season is under way with some amazing moments already passing us by. Make sure to check out this year’s final season on HBO.

tags: at&t beyond the wall forthethrone framestore game of thrones got hbo Magic Leap the dead must die
previous Ballista Set To Be One Of The Upcoming Original Titles For Oculus Quest
next Oculus Quest And Rift S Launching On May 21 With Pre-Orders Now Available
Related Posts