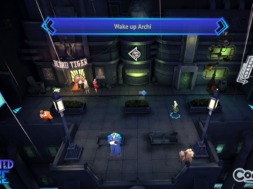 Mobile VR games are often times overlooked as it doesn’t quite provide the quality graphics found on the PC powered VR headsets. But Coatsink may have just defied those odds with the announcement of Augmented Empire. Partnered with Oculus Studios (remnants of the past) this particular VR title is ready to tug on the hearts of RPG lovers around the world.

Augmented Empire is a story-driven tactical RPG VR game set in the distant future on an island called New Savannah. This isolated neo-noir city is divided into three tiers by the ‘Citizen Grade System.’ While the citizens deemed of high societal value live in luxury at the summit, outliers and criminals are forced to live in squalor at the island’s depths.

From the armchair of their secluded hideout, you’ll use simple look-and-click controls to instruct the team of 6 augmented misfits in a world rendered as an ‘augmented reality’ diorama before their eyes. You’ll be able to interact with the office around the characters to investigate new developments, make calls, and develop the skills of your team.

Voice actors for the game include:

“With a strong focus on story and deep but accessible gameplay, we wanted to give Gear VR gamers an extraordinary experience,” said Coatsink CEO Tom Beardsmore. “We’re thrilled with the calibre of talent involved in Augmented Empire.”

Augmented Empire will have over 10 hours of gameplay across 26 different missions and 60 environments. It will feature a cyberpunk story featuring the 6 distinct characters with the ability to upgrade their weaponry. The game is set to release on July 13th for Samsung Gear VR but a set price has yet to be announced. Make sure to stay tuned for the latest news in regards to Augmented Empire.