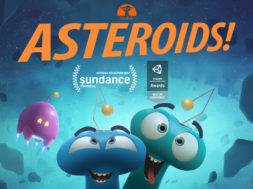 Baobab Studios is an award winning studio that is recognized for creating top notch animations in the virtual world. Made up of veterans from the digital animation community, the team has been creating Pixar like stories for VR. Recently, they have launched their latest virtual reality story called Asteroids! on Google Daydream and Samsung Gear VR that showcases their talent and creativity.

In the trailer, you’ll see that Asteroids! follows a story of two alien creatures named Cheez (voiced by Elizabeth Banks) and Peas (voiced by Ingrid Nielsen). The crew looks to get into some unavoidable trouble aboard their spacecraft. Asteroids! is a continuation from their original VR story called Invasion!

If you’re one of those people who love animated stories from Pixar or Dreamworks, this will be right up your alley. Make sure to check it out today on the Samsung Gear VR and Google Daydream VR. The best thing is that it’s available for free.

tags: asteroids! baobab studios dreamworks pixar
previous Elon Musk Might Be Getting Involved In The Virtual Reality Business
next Accounting+ Is Now Available On PSVR - Check Out The Hilarious Trailer For it
Related Posts