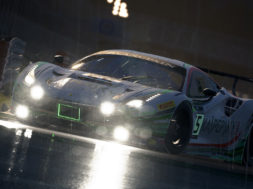 Project Cars 2 has been a great goto VR simulation for car racing. But now, Assetto Corsa Competizione is coming to VR. The company announced that they will be launching the new title on Steam Early Access starting September 12, 2018 with VR support starting on October 10th, 2018.

Assetto Corsa Competizione is the new official Blancpain GT series video game that puts the user in a simulation where you get to drive and manuever GT vehicles. You will get to experience the real atmosphere of the ​​GT3 championship, competing against official drivers, teams, cars and circuits reproduced in-game with the highest level of accuracy ever achieved. You will get to test out Sprint, Endurance and Spa 24 Hours races through the game.

The game itself was built on Unreal Engine 4 to create photorealistic weather conditions and graphics, nice races, motion capture animations, reaching a new standard in terms of driving realism and immersion, thanks to its further improved tyre and aerodynamic models.

The game will feature a multiplayer mode where you get to drive against other real players. According to the developers, “The matchmaking function makes sure that you can compete with opponents of similar skill level and easily find online races to join, while the leaderboards will allow you to compare single-lap performance with virtual pilots from around the world with the same car, circuit and weather conditions.”

The trailer above shows in-game footage of how crisp everything looks. Incorporated with VR, you will truly be immersed in the atmosphere. 505 Games hasn’t officially stated which headsets will be compatible with this VR racing simulation. In our guess, we believe that it will be comptaible with the HTC Vive and possibly the Oculus Rift.

You can pre-order the game if you are interested in the title. The beta for Assetto Corsa Competizione starts on September 12th with VR support starting October 10th. Stay tuned for updates.