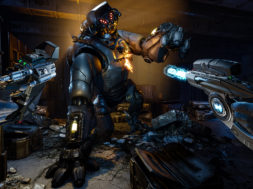 ARKTIKA.1 is a first person shooter VR game that takes place in the year 2120 in a post-apocalyptic setting where small pockets of human colonies struggle to survive throughout the new ice age that has dawned on the planet. Users will play as a hired mercenary by Citadel Security to protect one of the last colonies in the wastelands of old Russia. You’ll be combating violent raiders, marauders, and other horrifying mutated creatures.

“This is a major step forward for 4A Games,” said Andriy Prokhorov, the Creative Director and Co-Founder of 4A Games. “ARKTIKA.1 represents all that we have learned about creating life-like environments, implementing responsive shooting mechanics, and delivering exceptional visual fidelity on console and PC. ARKTIKA.1 is likely to be the first AAA shooter built from the ground up for VR, instead of the usual practice of porting from another platform. On top of that, the precision and range offered by Oculus Touch tracked controllers takes realistic shootouts to a whole new level.”

In the video above you can see the various weapons that you’ll be able to wield in order to fend off the enemies. At your disposal will be new futuristic weapons and some classic guns that you can find in the real-world today. One of the weapons that lead game designer Andrii Krasavin highlights is the Minotaur revolver which is revitalized with modern tools and materials. The game will allow you to add-on laser sights which provides you with better aim down the barrel of the gun.

ARKTIKA.1 will allow you to dual-wield weapons to have a better chance at taking down your enemies. The game also seems to be teleportation based rather than locomotion. But this might be updated with future DLC’s like the way Robo Recall was done.

ARKTIKA.1 is available for purchase at the Oculus Store today for $29.99.  Make sure to give this game a go as it demonstrates strengths of quality immersive content and gameplay.