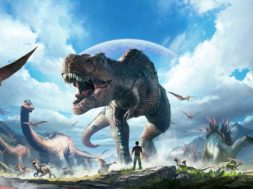 Snail Games has announced that Ark Park, their upcoming VR multiplayer dinosaur shooting game, will be finally releasing on the PSVR, HTC Vive, and Oculus Rift on March 22 during the Game Developer Conference (GDC) 2018. The game has been long in the making and is now close to finally releasing.

The game features some incredible looking dinosaurs where you’ll be able to experience it in VR. Ark Park hopes to let you live your dreams of entering a world where living breathing dinosaurs roam freely on Earth. Users will be able to explore the virtual park with no actual plot line. You simply take tours with your friends and share a unique experience of interacting and killing some dinosaurs up-front and close.

This isn’t your ordinary Jurassic Park themed game. Rather, you will be equipped to take down the biggest of dinosaurs. Ark Park doesn’t currently have a price on the game. But we’ll soon be hearing more information as we get closer to the launch date by Snail Games.