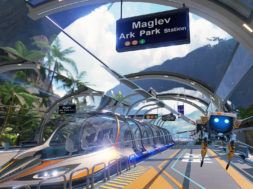 What do you get when you mix Jurassic Park, guns, adventures, and VR? You get Ark Park, a theme park attraction where you get to go kill dinosaurs. According to their descriptions, Ark Park is a multiplayer exploration game that’s designed from the ground up to fulfill an experience of being in a dinosaur VR theme park.

Ark Park hopes to let you live your dreams of entering a world where living breathing dinosaurs roam freely on Earth. Users will be able to explore the virtual park with no actual plot line. You simply take tours with your friends and share a unique experience of interacting and killing some dinosaurs up-front and close.

Ark Park was developed by Snail Games studios where they released updated information about the game at this year’s ChinaJoy event. Currently, the VR title is set to release on all major platforms including the HTC Vive, Oculus Rift, and PlayStation VR.

The trailer itself was quite surprising as it looked more like an adventure themed game where you didn’t have to mow down dinosaurs with guns. But things turn awry quick as you wield various weapons to kill the oncoming dinosaurs. There’s even a gorilla that looks like it took some steroids in the past.

There isn’t a set release date yet beyond their plans of launching some time later this year. Stay tuned for updates. What are your thoughts after watching this trailer?