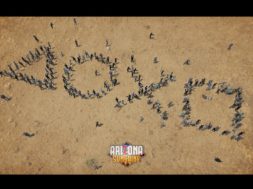 This morning, PlayStation confirmed Arizona Sunshine will be coming to PSVR in June.

Prior to official confirmation, Vertigo Games, the developer of Arizona Sunshine sent out a teaser tweet (below) with the game’s zombies creating an areal formation of PlayStation’s controller buttons.

Arizona Sunshine for PlayStation VR will also feature support for the new PS VR Aim controller, which is set to be released next week. Trevor Bloom from Vertigo gave the run down on how the Aim controller will be different from the dual controllers on other systems, promising a unique experience that is definitely not lesser.

“As for the Aim controller, since the game was initially created with dual-wielding guns in mind, we’ve thoroughly tested ways to get the support for it right,” said Bloom. “And while using the Aim controller limits you to using a single weapon at a time, it makes up for that by increasing accuracy and control, upping your chances for critical, dismembering hits – that’s right, the fan-favourite zombie mutilation mechanic also made it onto PlayStation VR!”

“Arizona Sunshine has a campaign that spans 8 diverse levels set in anything from treacherous canyons to deep, dark mines, which lets you take on the zombies solo or join forces with a friend in co-op campaign mode. And that’s not all, there is also an infinite game mode that pits you against endless waves of zombies with up to three other players…but we should probably warn you that more warm brains also mean more hungry undead!” said Bloom of Arizona Sunshine’s VR features.

If you don’t already know about this top-rated, zombie survival, first-person shooter game, read our write up on it here!