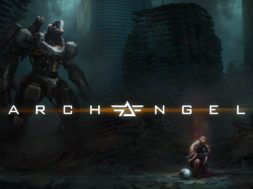 Skydance Interactive, the interactive entertainment division of Skydance Media, announced yesterday the launch of the highly-anticipated VR game, Archangel on PlayStation VR. This award-winning first-person shooter VR title will place you inside the cockpit of a six-story high war machine where you must lead your squad mates in an incredible VR battle across the scarred landscapes of a post-apocalyptic America.

Archangel will be an exclusive title for PlayStation VR for two weeks before getting a launch on platforms like the Oculus Rift and HTC Vive. In the PSVR version, You’ll be using the DualShock controllers or PlayStation Move to control the actions of your mech-suit.

“How better to introduce players to Skydance Interactive’s vision for the future of virtual reality gaming than to give them hands-on control of a giant mech in a way that no other medium can deliver,” said Peter Akemann, President of Skydance Interactive. “Now is the time to join the resistance, protect your friends and countrymen, and become the beacon of hope that America needs – the Archangel!”

Archangel takes place in year 2089 where users will be playing the role of Gabby or Gabriel Walker, codename “Guardian,” who has been selected by the United States Free Forces to lead the resistance against the tyrannical corporation HUMNX, a private conglomerate that governs what is left of our ravaged nation. Players must use strategy and skill to fire upon enemies with a wide array of high-powered weapons while protecting their allies from onslaught.

We were able to demo the game during E3 and it was certainly jam-packed with action and explosives, something you’d see in a Michael Bay movie except in this scenario you play the role of the main character.

Archangel is available now at the official PlayStation Store for $39.99. Skydance Interactive plans on releasing the game on HTC Vive and Oculus Rift starting August 2nd, 2017. You’ll also be able to try out the thrilling experience at IMAX VR Centres sometime in August. Suit up and get ready to mechanize as you are the last hope to our survival in this post-apocalyptic world.

Also, stay-tuned as we’ll be unveiling our review of the game.