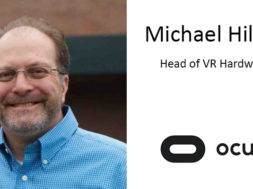 Yesterday, Facebook announced Michael Hillman as their new Head of VR Hardware. Hillman, an Apple veteran, was a lead designer on the iMac, and then headed up desktops. He is listed as an inventor on a number of Apple patents related to displays and battery technologies as well. After 15 years at Apple, Hillman most recently worked as a VP at Zoox, a self-driving vehicle start-up.

Facebook CEO Mark Zuckerberg sees its company as the future of VR, and is looking to get consumers excited enough about their headsets to increase sales. At Oculus, Hillman’s first line of business will be creating the product roadmap for their headsets.

The company’s most popular virtual reality device, the Oculus Rift headset, was released one year ago. Early adopters complained about delays caused by manufacturing issues, and the steep $599 price tag. By December 2016, Oculus released its Touch motion controllers for the Rift, and last month dropped the prices of both the controllers and headset by $100. Samsung’s Gear VR is also an Oculus product.

Oculus Rift and its main competitor HTC Vive both rely on wired connections for their HDMI, so it’s highly likely that a move to wireless will be the next big thing in hardware. At Oculus’s OC3 developer’s conference late last year, Oculus gave press previews of “Santa Cruz,” its wirelessly tracked all-in-one prototype headset. An Oculus executive told TechCrunch that the company’s standalone headset was being developed under a separate team outside of the PC-based hardware division.

These current developments definitely seem to beg the question about Apple’s place in the VR/AR world. To date, no Mac device is strong enough to power the Rift. It seems that Apple is more focused on the AR component, brushing aside VR. Rumor mills are churning, claiming Apple is focused on developing pair of consumer level, lightweight AR glasses in partnership with optical specialist Carl Zeiss, that could be released in 2018. Sound kind of familiar?

Either way, the future of VR and AR headsets is about to get a whole lot more interesting — and advanced. Sounds like a rose-colored lens to us!