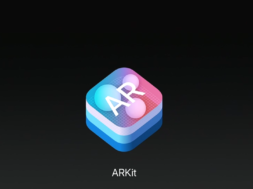 During WWDC Apple has announced a new app called ARKit for iOS 11 that will allow content creators and developers to create AR experiences for their mobile devices. With this new app, it will empower the developers to cater to hundreds of millions of people using iPhones and iPads today. During the keynote, the team showed in essence what you will be able to do with the new app.

From fast, stable motion tracking to plane estimation with basic boundaries, Apple has their sight on pumping out a lot of apps oriented around immersive content through ARKit. The new app will support Unity, Unreal Engine 4, SceneKit, and Xcode app templates. And to demonstrate how it all works, Apple brought onto stage Alasdair Coull, the Creative Director at Peter Jackson’s new company, Wingnut AR.

In their short demo, Coull demonstrated the creative content you can produce using the ARKit. In their WIP, you could see how they transformed a nearby desk into a tabletop full of imagination and creativity. Coull filled the space with awesome visuals of sci-fi cinematics and spaceships battling against one another near a junkyard. This included audio to further enhance the experience.

While the demo was quite short, you could see the capabilities of ARKit and how it’ll attract developers to create content for Apple’s mobile devices. Further updates to come.