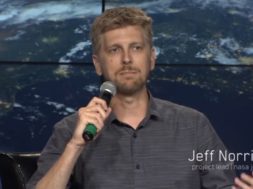 Jeff Norris, former Mission Operations Innovation Chief of NASA’s Jet Propulsion Lab (JPL), is another fairly new hire to be added to the impressive employee roster at Apple. Bloomberg reported that Norris joined Apple earlier this year as a senior manager on the company’s augmented reality team. The team, run by former Dolby Labs executive Mike Rockwell is said to be working on the highly secretive Apple AR Glasses.While it has not been confirmed by sources [who are willing to be named] that this is the exact reason for Norris’s hire, it is hard not to guess the direct correlation.

During his time at NASA (he joined in 1999), Norris pioneered efforts to create new ways to use VR and AR to control spacecraft and robots in space. Norris’s NASA projects included a program using the Microsoft HoloLens to assist communication between astronauts living in the International Space Station and those on Earth, known as project Sidekick. The video below shows Sidekick’s application in space. He also worked on a project that built the Mars 2020 rover in mixed reality.

Apple Chief Executive Officer Tim Cook has stated many times that the future is vested in augmented reality. He also has mentioned many times that Apple is more interested in AR than VR He has likened AR’s potential to that of the smartphone, predicting last year that people will “have AR experiences every day, almost like eating three meals a day. It will become that much a part of you,” according to Bloomberg.”Apple hopes to bring AR-related hardware to market as soon as 2018,” Bloomberg News has reported. “Norris — along with other AR team hires from the movie industry, Facebook Inc.’s Oculus and Microsoft — will be working to bring that vision to reality.”