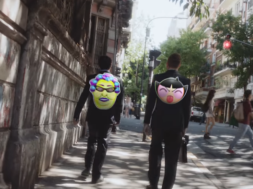 We’ve been hearing multiple rumors about how Apple is working on some sort of AR technology, deep within their lairs. From Tim Cook hinting at their interest in the technology to Apple opening up new AR development centers in Israel, the company is on a silent move to enter the mixed reality industry. Recently, Apple’s efforts have further been backed up with a new concept video.

In the video you’ll see people putting digital stickers on friends, family, and strangers within the physical world. While the trailer doesn’t provide proof to their actual AR solution, it does break ground on their veiled efforts.

The video was intentionally produced in this manner to highlight their stickers feature for the iPhone 7. But their ulterior motive may have been to introduce customers to augmented reality. Yes, it’s true that many people are familiar with augmented reality technology through apps such as Pokemon Go and Snapchat, but they haven’t seen it the way Apple wants to display their own brand of AR technology.

Having digital images flicker in the real world is the “cool” factor that Apple wants customers getting familiar with, similar to the way they’ve branded the iPhone. Apple single-handedly disrupted a multi-billion dollar industry when it was being dominated by big household names. They will surely look to make that impact with some sort of AR hardware solution, knowing that the mixed reality industry is projected to reach $50+ billion by 2021. They have done this in the smartphone industry with their iPhone line and will look to make a similar impact in the mixed reality industry.

The real question will be whether Apple creates some sort of AR glasses or AR headsets for their loyal customers. The company is keen on design and will probably look to create a solution containing minimal amounts of buttons and a friendly user-interface. While this can be taken up as speculation, it can’t be denied that Apple is working on releasing some sort of AR solution in the near future.

We’re already seeing the big tech titans integrating AR technology on to their platforms, recently with Facebook launching their Snapchat like features for Messenger and Instagram. It won’t be too long before you hear Apple’s footsteps irk behind the veil.