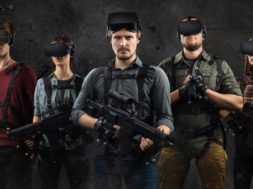 Anvio VR is challenging competitors such as The Void and Velocity VR in bringing the best multiplayer VR arena to the world.

According to their team, “Anvio VR is designed to provide complete freedom of movement for the player. In our virtual worlds you can run, jump, wave and much more, all together with your friends.”

Anvio VR has a large dedicated warehouse where players will be fully wireless when playing their unique game. You won’t have to worry about any tethers or running our of space creating an immersive experience. “We aim to bring you an experience unlike any other,” said the Anvio VR team.

The new virtual reality platform was developed by Vortex LLC based in Moscow. They use advanced motion capture systems which are retro-fitted to the Oculus Rift. Anvio VR offers 2,150 square feet of play area within their warehouse. Players will also be wielding peripheral devices such as battle rifles which are motion captured and tracked.

Anvio VR has been open for customers for a couple of months now with their first location being in Moscow, Russia. The company has been seeing a lot of customers wanting to try the experience with plans of expansion outside of the country.

Make sure to follow us for more updates on where the next VR Arena location will be opening up! One may just be coming soon near you. For business opportunities, please reach us at [email protected]