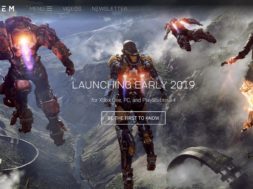 Anthem, the upcoming open world gun-shooting RPG game by EA’s Bioware was suppose to make its debut some time this year in 2018. But that now is all riddled away as EA exec Blake Jorgensen stated to WSJ that Anthem will be releasing next year in 2019.

There’s already been rumors of how Anthem will be the ultimate micro-transaction game with loot boxes at every corner. According to the leaked images, EA plans to turn the game into their biggest money grabber to date but we can’t be sure that these images are authentic or will be present in the game. EA is already facing heavy backlash with Star Wars: Battlefront II but will continue their in-game microtransactions soon.

In place of Anthem will be another Battlefield game releasing in 2018. EA stated that it would be better to release the game in 2019 during a quieter time of the year rather than cramming it into the holiday window. Also, in a call with investors, Andrew Wilson, EA Chief Executive said, “Regardless of how it’s being portrayed, we’re not looking at that as a delay… The date is chosen by by portfolio balance, not product readiness.”

According to sources at Kotaku, BioWare was never on track to release Anthem in 2018 as it was “never realistic.” The company still has to get ready for a beta test of the game. Anthem has been in development since 2012 and has undergone many changes in studio heads.

Wilson also went on to say that “As a new IP , it probably makes sense to give [Anthem] its own launch window.” The chief executive also said that DICE is currently making the next Battlefield game. DICE is owned by EA and has made the previous Battlefield titles.