Anime Is Coming To Bigscreen VR 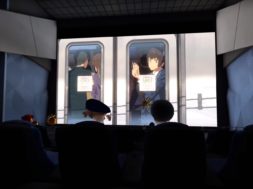 Anime Is Coming To Bigscreen VR

Bigscreen has announced a partnership with Funimation to showcase some of their anime collection in virtual reality.

Bigscreen has been a platform used by many VR users to access videos and movies on a gigantic screen in the virtual space. The company has raised lots of capital and partnered up with some Hollywood studios to ramp up their demand.

Now with a partnership with Funimation, the company looks to capture a new set of audience to hopefully boost their viewership and membership.

“Starting in May with Makoto Shinkai’s masterwork love story, Your Name., Funimation anime in virtual reality will be the perfect way to relive some of your favorite movie experiences. And yes, you will cry.,” said Funimation in their blog post.

Starting in May, here are some of the shows and movies that you can attend in Bigscreen.

The Disappearance of Haruhi Suzumiya – May 29-31

Movies on demand on Big Screen

For classic catalog films, a ticket will cost $3.99, more recent anime releases will run $5.99, and brand new release films will be $14.99. What are your thoughts?