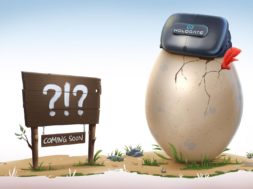 Over the past few years there have been some amazing IPs come to the VR platform including the Fallout franchise by Bethesda. Now we might get to witness another beloved franchise join the virtual world with Angry Birds.

In a series of hinting images and hype messages, Hologate has teased the audience with something big that they will be revealing at this years IAAPA 2018. The company has stated, “The tension is building and soon we’ll be able to share more. We know it’ll be a hit! Find HOLOGATE at the Creative Works booth #4471 Orlando, November 13-16th.”

While the message is quite vague, you can see some key graphics that resemble the famous franchise. And this rumor is actually quite realistic. Angry Birds has actually been completed for the Magic Leap platform and they have done previous testing on the Rift VR headset.

In addition, Angry Birds is a much simpler concept in design for VR compared to many other titles that require a lot of time. Angry Birds is more similar to Fruit Ninja then it would be to Fallout 4 VR. But again, this is still just a rumor and we will soon find out on November 13th if the large franchise is indeed coming to the virtual reality platform.