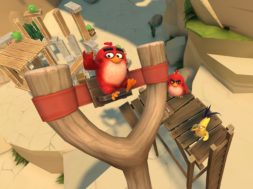 Resolution Games along with Rovio Entertainment has announced the launch of the new virtual reality game Angry Birds VR: Isle of Pigs for Oculus Rift and HTC Vive.

As you probably know, Angry Birds has been a stable franchise for quite a long time now. They even got a release on the big screen with some of their most iconic characters. But now, they are getting an official full release of their game on the VR platform.

In Angry Birds VR: Isle of Pigs, you will get to experience first-hand how it feels to slingshot the likes of Red, Chuck, Bomb and the Blues within the fully immersive environment of virtual reality.

The game initially will come with more than 50 levels of gameplay where you will get to travel around a remote island populated with the infamous green pigs.

Players will bombard the island’s exotic beaches, steep cliffs, snowy slopes and party city to take on the green pigs, destroy their structures and retrieve the stolen eggs.

VR will allow you to approach the levels from different angles for the best accuracy, while leveraging classic gameplay elements to progress or strive for three stars on all rounds.

“As a company we’re deeply interested in the future of gaming and in fact, investigating new tech and platforms remains one of our core strategic pillars,” said Sami Ronkainen, Creative Director, Extended Reality at Rovio Entertainment. “We’re delighted to be supporting the VR industry’s growth and introducing the beloved Angry Birds slingshot gameplay to new platforms.”

“The beauty of VR is that it allows players to enter and play in a 3D, fictional game universe, something people have fantasized about for decades. And, VR inherently lends itself well to strong characters, which is why the Angry Birds brand is such a great fit with its humor and strong gameplay,” said Tommy Palm, CEO of Resolution Games. “It has been incredibly fun for us to bring that to life, opening the door so players can immerse themselves in that world.”

If this sounds like your cup of tea, you can purchase Angry Birds VR: Isle of Pigs now on the Oculus Store or the Steam marketplace for $14.99. The game is available on both the Oculus Rift and HTC Vive.