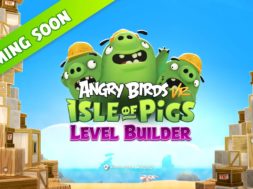 Resolution Games has announced that they will be adding a level builder to Angry Birds: Isle of Pigs.

Angry Birds has been a franchise success for many years and recently have released Isle of Pigs to virtual reality for fans to enjoy as a part of their movie release.

The game provides that nostalgic feeling when you first played the original Angry Birds but now in a a more immersive environment. With the addition of the Level Builder we can take the creativity to the next level.

“We have been working on this level builder technology for some time and are very excited to have it make its debut in Angry Birds VR: Isle of Pigs,” said Tommy Palm, CEO and co-founder of Resolution Games. “With our upcoming release, players will have the power to show their creativity in ways we could never imagine. We can’t wait to see what the fans come up with!”

The level builder will be its own sandbox level-building environment that allows players to build and play their own levels with ease according to Resolution Games. In this first release, players can pass and play with friends and family to have others try and beat their creations.

In 2020, Resolution Games is planning to launch an online version that will allow players to share their levels with the greater Angry Birds VR: Isle of Pigs community and have challengers compete for the most difficult, highest scoring, most creative and any number of variations.

“For now, we’re eager to get a local version out so fans can start tinkering with the level builder and have endless fun with their creations,” added Palm.

Angry Birds VR: Isle of Pigs is available today on PlayStation VR, Oculus Rift and HTC Vive. This will be an addition to the existing game.