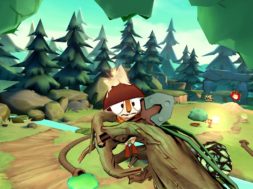 Resolution Games, the studio behind Angry Birds VR: Isle of Pigs has finally launched their next big IP called Acron: Attack of the Squirrels in VR.

Acron is a cross-platform VR party game that is both competitive and cooperative. Resolution states that this will be the “first multiplayer party game to combine VR and mobile gaming at this scale for a truly social VR experience.”

“Acron: Attack of the Squirrels! takes VR outside of the headset like never before,” said Tommy Palm, co-founder and CEO of Resolution Games. “It’s at its best when played as a couch party game together with a bunch of friends and is an ideal addition to your game nights — whether at home or tossing your Oculus Quest in your backpack and taking it to a friend’s place. And it’s really the perfect game for introducing newcomers to VR, because it’s easy to pick up and everyone can participate at the same time.”

In Acron: Attack of the Squirrels!, one player will play on the VR headset – supported at launch by Oculus Quest, Oculus Rift and HTC Vive – and takes on the character of a large, ancient tree that is the sole protector of the golden acorns. Meanwhile, two to eight frenemies then grab their iOS and Android devices to become rebel squirrels that’ll do anything to steal the golden acorns using an arsenal of unique abilities.

As a band of squirrels, mobile players must work together to develop strategies to outsmart the tree in order to scurry around and gather as many acorns as they can. Players select their squirrel character based on personality traits. Quick-witted Zip is the fast squirrel and has speed running abilities; gentle giant Chunk protects his friends by carrying a shield; Doug channels his rage issues to dig tunnels that allow for safe travel underground; and crafty Sim builds ramps for vertical movement.

In order to steal the golden acorns, the players will be able to leverage a myriad of tools and distraction tactics available in the game. All the while, the tree tries to knock out the squirrels that are out to steal the nuts by using the controllers to grab and hurl wood chunks, boulders and sticky sap to keep the squirrels at bay.

At launch, Acron: Attack of the Squirrels! features six levels with varying layouts and visual themes for each.  You can download the game today for $19.99 and free for mobile (iOS & Android) players.

h J R
VR & FUN @vrandfun Detailed Information On What We Can Expect With Half-Life:Alyx https://t.co/qPt2ZOXc8S