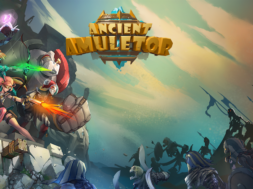 We’ve been learning about many quality VR games coming to PlayStation VR in the near future. Some of those titles invlude Star Child and Moss. Today, we’re here to add-on to that growing list with another unique VR title called Ancient Amuletor by Ti Games.

Ancient Amuletor is an action tower defense game that throws you into an ancient times of civilization where you’ll be battling magical creatures, evil monsters and legendary foes in single-player and cooperative multiplayer for up to three players.

You’ll have options to choose from various characters in saving this ancient world. They all have individual characteristics with unique abilities that reeks havoc on these monsters. In the trailer, you can see that some characters use guns and arrows while other characters can summon golems onto lanes to defend the crystal. There’s even a character that uses magic to fend of the opponents.

Some of the in-game features:

While there are a few tower defense games available today in VR, Ancient Amuletor does a great job separating itself from the rest with original ideas and content for the genre. The characters have that lively feel from characters seen in Overwatch and provide a sense of enjoyment while playing the game. Ancient Amuletor will be releasing on June 27 for PSVR. You can try a free demo version today to see if this tower defense game is the right VR game for you.