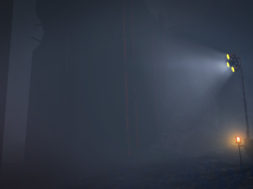 A studio named GexagonVR has decided to give an open world game a shot for virtual reality which is always a difficult challenge. But through their creativity and engineering they have gone on to publish a title called Nevrosa: Primal Ritual.

In the game you’ll be exploring an uncharted mist world where you’ll fight unknown creatures and reveal dark secrets that hide in these unexplored lands.

Second half of XX century. After months of successful researches and expeditions, William Conway is ready to share with the scientific world not only the fascinating Teleportation technology he discovered, but also a completely new world this invention leads to.

With his loyal companions, William prepared a safe area amid the vast alien lands. Now he needed to check everything one last time, and write a good speech. This place may not be perfect: everything creaks, sparkles, and there’s no hot water, but how could such a thing stop a true pioneer?

This new world keeps its secrets under layers of different mist, full of unknown creatures and mysteries to solve.

Giving a last look from observation deck, Conway could not expect what a journey lies ahead. Once shared his blood with this world, William starts an ancient ritual. Your blood has power here, but Blood Magic always attracts creatures even more dangerous than local monsters — you have to finish what you started until it is too late, there is no other way… Is it?

Nevrosa: Primal Ritual is available today on HTC Vive, Oculus Rift, and Valve Index. Open world games are always a challenge without a good storyline but they seem to have created something interesting. Make sure to give this game a look.