Amir Frenkel is Now Head of Computer Vision at Oculus 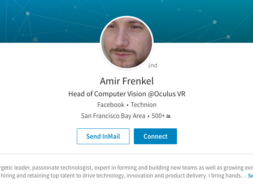 Amir Frenkel is Now Head of Computer Vision at Oculus

Remember the story of Dov Katz, the former ‘Head of Computer Vision’ at Oculus? If you’re not familiar with the story, Katz was arrested on December 23rd, 2016 on the charges of commercial sexual abuse of a minor after soliciting sex from a posed 15 year old girl which we found on Backpage. When this story first broke out, it didn’t sit too well with Facebook and Oculus. They removed Katz from the position and company, which in turn has led to Oculus having to search for a new replacement. And the company has seemed to find one with Amir Frenkel.

According to Frenkel’s Linkedin account it states that he is the new ‘Head of Computer Vision’ at Oculus VR. He was formerly the Director of Engineering at Facebook and the Head of Wearables Engineering at Google. He joined Facebook last November and has transitioned into a new role with Oculus.

There seems to be a lot of shift in power going on lately at Oculus with Brendan Iribe stepping down from the CEO recently and Palmer Luckey, founer of Oculus, leaving the company altogether. Even yesterday, Facebook shut down the whole Oculus Story Studio team, which left 45 individuals jobless (for the time being).

Amir Frenkel comes in with a lot of experience and background in software development so this might be a good transition for the whole Oculus team.