AMD Joins Forces With Square-Enix And Adobe To Launch AMD4U 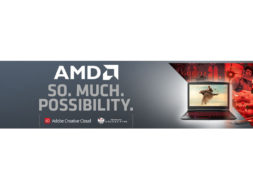 AMD Joins Forces With Square-Enix And Adobe To Launch AMD4U

Together, they’ll be launching a new program called AMD4U. This new initiative will provide AMD consumers with a range of games from a new generation of cutting edge independent development teams from around the world.

Through this unique partnership, AMD has developed a program that will support and work directly with the “Square Enix Collective,” the indie publishing program of Square Enix with a focus of driving awareness of AMD’s new product lineup which has been developed with the gamers in mind.

AMD4U has been carefully structured between AMD and Square Enix to provide technology and hardware support for up and coming indie developers publishing through the Collective, along with helping bring the games to market through a wide range of partnership elements.

Key elements of the partnership include direct participation at AMD’s consumer events around the world; alongside hardware, software, engineering support, and extended marketing partnerships with AMD’s OEM partners participating in the AMD4U program, including DELL, Alienware, HP, Lenovo and many more.

As part of the program, anyone purchasing an AMD-powered PC from a range of OEM’s will have the ability to validate their hardware and receive up to three free games from the entire Square Enix Collective portfolio.  Titles include previously released games Black the Fall, Children of Zodiarc, Deadbeat Heroes, Tokyo Dark, Oh My Godheads, along with the upcoming titles Fear Effect Sedna and Battalion 1944.

One of the biggest titles in the Collective portfolio participating in this program is the highly anticipated Battalion 1944. Developed by Bulkhead Studios, a UK-based studio who also released their game The Turing Test through the Collective earlier this year. Battalion 1044 recaptures the core of a classic multiplayer shooters and propels WW2 into the next generation. Battalion 1944 utilizes the most advanced industry technology to create a visceral and heart-thumping multiplayer experience. Fight in real world locations such as the streets of Carentan, the forests of Bastogne and many more in the spiritual successor to the great multiplayer shooters of the past… all packaged into a competitive multiplayer environment. This game is being developed using a combination of the new Ryzen 1800x and the Radeon Vega graphics cards. It will be on show at upcoming events including GamesCom & EGX.

There are many amazing indie developers that haven’t had access to proper hardware and software.  Through AMD and Square Enix’s newly formed partnership and program, both companies have set eyes to assist these developers in need.