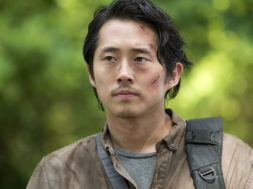 The Walking Dead has finally released their first part of the 360 VR experience called the ‘Feast.’ The video is a 1:15 clip of zombies devouring what appears to be a human body in the middle of the woods. The 360 experience will allow you to witness the walkers feasting on the flesh from a first person perspective with the ability to see in any direction.

The walkers in the ‘Feast’ have similar characteristics and looks from the main show. However, this 360 video doesn’t play any significant role to the main ‘Walking Dead’ story line. AMC plans on releasing more 360 videos like this one for fans to enjoy the walkers up close and personal.

The benefits of using 360 video technology is the level of immersion it creates with the audience. You get a first person view of the location and also have the ability to look in any direction.

The ‘Feast’ comes out at a perfect time considering today is Halloween. We hope you enjoy this video in true VR fashion with the Samsung Gear VR or Google Cardboard. Happy Halloween to everyone!