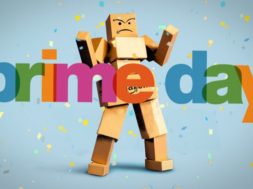 Updates will be continuous for the next 30 hours!

Oculus just announced the biggest deal yet on their Rift bundle including the headset, 2x sensors, Touch controllers, Xbox One controller, remote, cables, and seven free titles available when you set up Rift+Touch, including Lucky’s Tale, Medium, Toybox, Quill, Dead and Buried, Dragon Front, and Robo Recall for $400. While this is an amazing deal, Amazon will be launching their own savings on various VR headsets for Prime Day starting tonight at 9PM EST.

The Samsung Gear VR headset with the controller is listed for $102.57, which is $27.42 off of original MSRP. This specific model is the U.S. version with warranty included. Amazon has yet to announce any details to whether if they’ll be releasing any sales around the HTC Vive headset.

HTC has been pretty steady with their pricing for the Vive VR headset since initial launch. The company believes that it’s a great product marketed at the right price. There are also a bunch of other mobile VR headsets on sale today. Make sure to check out their Prime Day marketplace to pick yourself the right HMD.