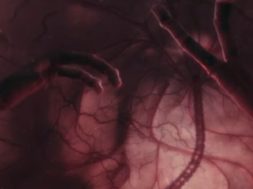 The Alien: Convenant franchise is dabbling in virtual reality with its new immersive experience In Utero. Not unintentionally, In Utero will be made available on Oculus tomorrow, April 26, which is also “Alien Day”. Produced by 20th Century Fox and directed by Ridley Scott, the VR experience is still under lock and key, with just a teaser released for promotion.

Yesterday’s press release described their latest VR foray as” a 360-degree virtual reality journey into a living nightmare and offers a terrifyingly close and personal encounter as an alien neomorph at the time of its birth. Fans will be able to experience the world around them, reliving the very first memories of the neomorph in an immersive environment.”

From the teaser — and the title — it quickly becomes apparent that you are the alien, in utero, about to be delivered into an unwelcoming and terrified world. Shrieks, cries, the sound of broken glass, crashing, and feral, non-human grunts make it quite clear that mass chaos is about to (or already has…let’s be honest) ensue(d). I actually felt bad for the baby alien, until I watched the preview — now I’m just confused.

Despite Fox’s last VR experience for The Martian, which was considered an underwhelming flop by public opinion, their willingness to try again offers fans a sense of hope that this experience will be a step up from last year. Stay tuned for more information after In Utero’s big reveal, and have a happy Alien Day tomorrow, Earthlings!