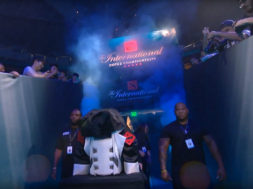 Elon Musk, founder of Tesla and SpaceX, recently stated that we should be careful when it comes to the advancement of AI. These neural computational programs are able to self-teach and become better at their practice through a series of simulations that weave out their flaws. Just look at what Google was able to do against the top Go players recently. And to make things even more interesting, the Elon Musk-back OpenAI team has developed their own AI that was able to beat some of the best esports players in Dota 2.

During a live demonstration at The International Dota 2 tournament, pro esports athletes such as Dendi competed against OpenAI in a one-on-one match where the AI was able to quickly learn, adapt, and conquer.

In the video footage you can see how the AI starts understanding the nuances to the game which would usually take human players a lot of practice and time to master. It learned how to zone against the enemies and put on a raze faking to draw in the enemy player. The AI also makes wise decisions which enables it to have lower actions per minute.

While this simulation was under a controlled environment, it just shows how quickly AI technology is advancing. OpenAI believes by next year’s Invitational, they’ll be able to beat the best Dota 2 teams on a five-on-five match.

This also seems to be a huge moment for Elon Musk who believes that this win over an esports player is a huge accomplishment for the OpenAI team. Dota 2 is more complex than traditional board games such as chess and Go and shows that their technology is quite advanced compared to other companies.

Is it time to be scared yet?

tags: AI dendi dota 2 elon musk OpenAI the invitational valve
next The 10 Years Of Excellence At Outside Lands
Related Posts