AI Assistants Get a Major Makeover 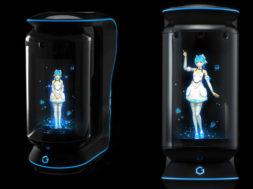 AI Assistants Get a Major Makeover

You name the AI, disembodied virtual assistant, and I’ll give you the name of the tech company behind the girl…Amazon, Apple, Microsoft, respectively.

We’re all familiar with them, and most likely we’ve asked favor (or fifty) from them in the past. While it may be easy to get frustrated when they misunderstand what you’re requesting, procure the wrong information, or simply “can’t help you with that,” these used and abused AI assistants are starting to get some serious upgrades (think voluptuous bodies, sassy stances, and doe-eyes) that may change how people interact with them.

Yesterday, Jaram Archer released a Youtube video on his “untitled network” and an accompanying blog post on his blog “unt1tled” introducing a concept appliance Pepper’s Ghost hologram that uses Windows 10’s native Cortana experience to give Cortana a human form. The video, below, has been receiving quite a bit of traction.

This is not the first prototype we’ve seen for holographic virtual assistants. Japan has their own version who lives inside the Gatebox, which is similar to an Amazon Echo or Google Home, except with the addition of the hologram assistant built in. Azuma Hikari (pictured below) is the female anime character who resides inside Gatebox.

According to Digital Trends, Hikari is a “fully interactive virtual girl, who at her most basic can control your smart home equipment. The sensors mean she can recognize your face and your voice, and is designed to be a companion who can wake you up in the morning, fill you in on your day’s activities, remind you of things to remember, and even welcome you back when you return home from work. There’s Bluetooth and a permanent connection to the internet, and the Gatebox can be linked up to a TV using an HDMI connection.”

The Gatebox is currently available for pre-order, and will work in the U.S., but the first production run is limited to 300 units that cost around $2,600 each. The one limiting factor is this: Hikari can only speak Japanese at the moment.

Digital Trends reports, “the Azuma Hikari character is 20 years-old, according to her own website, and enjoys watching anime and eating donuts, but isn’t a fan of insects. Her dream is to become a heroine for anyone working hard. Keeping people company, in any fashion at all, is where Hikari will be best put to work. A recent report showed at 32 percent, single-person households are the largest housing segment in Japan, so artificially intelligent characters like this can make sense.”

In my opinion, the commercial for Gatebox’s Hikari and the Hologram Cortana video certainly stirred up some serious déjà vu (think: Joaquin Pheonix falling for Scarlett Johannsen’s AI character in 2013’s sci-fi/romance Her). While the ever evolving, always learning AI assistants definitely have their benefits, it does beg the question of whether or not this will be healthy for interpersonal relationships of the future.

Gatebox has been said to be planning on releasing other characters in the future, however the other character proposed is also female. Although this technology is definitely eye-catching and exciting, I can’t help but feel that this predominantly female driven AI assistant workforce is a little unbalanced, at best.