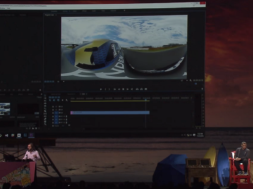 Ever since photo editing was possible on modern computers Adobe has been there to provide the necessary tools to bring out the magic. Adobe’s software such as Photoshop is used by millions around the world. Almost every professional photographer uses this tool to enhance and edit pictures with inside Photoshop. And with the current rise of 360 technology Adobe has unveiled their first 360 video editing tool called the CloverVR.

This new software will be capable of editing videos inside of VR using headsets such as the Oculus Rift. This strategy allows viewers to be correctly aligned and have an easier time following along during action sequences. When videographers edit from a 2D perspective, they don’t fully grasp the sense of what the audience will experience at any given time.

Stephen DiVerdi, one of the leading designers at Adobe, goes over their new groundbreaking feature called the Rotational Alignment Tool which allows the viewers to face a certain direction when transitioning between clips. And the amazing thing is that you can design this all within virtual reality. Having that power will really make a difference in virtual reality experiences with the use of 360 video technology.

Adobe hasn’t announced when it’ll be available but they look to become the stable of video editing in 360 VR with this newly announced software in the future.