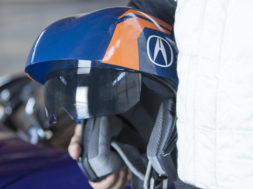 AR display assistance has always been a craving for racing enthusiasts and Acura looks to satisfy those cravings tonight with a livestream event featuring their 2018 TLX A-Spec sedan. The car manufacturer will be showcasing their new AR technology allowing racers to see virtual environments for each lap.  The audience will be able to spectate and interact with these racers on Facebook Live.

This particular event will pit drivers against one another to see who gets the fastest overall time during a three-lap time trial. The racers will have to maneuver around digital objects that’s intruding the course with each lap featuring a new mixed reality environment, visible to both the drivers and viewers.

Racers will have the AR displays connected to their helmets allowing them to focus on the road while bypassing the intrusive virtual objects. The HMD features a HD screen with a two-way mirror that allows the driver to see the AR overlaid onto the physical track. In the back seat of the TLX will be a computer rig, powered by Acura’s battery.

You can tune in tonight at 8PM EST on  YouTube, Facebook, and Twitter where the event will kick-off in a spectacular fashion. Viewers will be seeing the action through the cameras placed on the drivers’ helmets and various parts of the course.

While this event isn’t exactly Project Cars 2, it shows the variations in which immersive technology can be used to enhance an experience, such as the one being displayed tonight by Acura. Make sure to tune-in tonight and see what all the buzz is about.